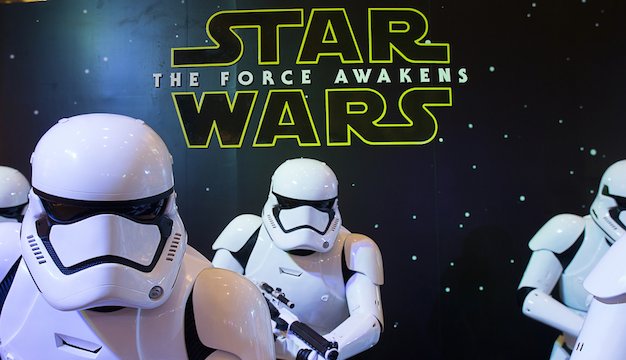 Last month, fans have literally gone delirious with anticipation for the premier of Star Wars: The Force Awakens movie. It has been about 10 years since the last one was shown and the new Star Wars movie promised to take us to its roots.

I would like to share with you an article written by Pastor Jeff Chaves of the Las Vegas Rescue Mission. Some would think that there are themes incorporated in the movie that reflect the gospel. Though it may be right to say that like Star Wars, we are all part of something bigger, if we look closely into God's word, the Bible teaches us that unlike the Force, we have a God that is caring and personal, never distant.

The Force is the religion of that "galaxy far, far away." If we study God’s Word, we find that God is nothing like a distant and impersonal force.

The latest edition of the Star Wars epic has been released. "The Force Awakens" opened to record breaking attendances all over the world. It would seem to be on track as one of the highest grossing films of all time. And it's impossible not to notice all of the Star Wars related products in the stores. (Do we really need Star Wars non-dairy creamer?) What is it about the adventures of the Skywalker family that has us so enthralled?

Of course, the movies are always known for the action and ground breaking special effects but the bottom line is that the entire saga is a great, epic story with realistic characters. Luke, Leia, Han Solo, and Chewbacca were our heroes growing up and the newest film brings them all back after a nearly 30 year absence. I've seen the movie, and I won't give away anything if you haven't, but I will tell you that this is the one we've been waiting for since "Return of the Jedi" ended. For me, it did not disappoint.

This installment is filled with all that you expect; starship battles, robots, strange alien creatures, encounters with evil villains, and the Force. In this movie, we find people who use the Force and some who are just discovering what the Force is. If you don't know, the Force is said to be “an energy field that flows though all living things.” That was the line from the original 1977 movie. This is the religion in this galaxy “far, far away.” It’s mysterious and a person has to spend many years to learn the ways of the Force. The villains have learned the “dark side” and the heroes the “light side”.

Interestingly, a recent Pew Research Study finds that 26% of Americans surveyed think of God as more like the Force and not as an individual. That includes 22% of people who identified themselves as Christians, think of God as distant and impersonal. That means that as many as one in five people sitting in our church don’t think that God is knowable like a person. For more details go to the Pew Forum’s website. (visit link)

Certainly, the Bible teaches that God is omnipresent and omnipotent and He cannot be fully understood but His is not a force. He is real and personal. Just by looking at a few of Jesus’ teachings, we can gain a much better view of God. Like Jesus said as He was sending out His disciples:

“Are not two sparrows sold for a penny? Yet not one of them will fall to the ground outside your Father’s care. And even the very hairs of your head are all numbered. So don’t be afraid; you are worth more than many sparrows.” - Matthew 10:29-31 (NIV)

In this we see that God is so big that He sees even the smallest birds but He is also caring and close. He knows how many hairs we have! I don’t even know that about myself. This gives us an image that is very different from a mysterious force.

Or how about that phrase we often hear in church, “Again, truly I tell you that if two of you on earth agree about anything they ask for, it will be done for them by my Father in heaven. For where two or three gather in my name, there am I with them.” - Matthew 18:19-20 (NIV) This also speaks of that omnipresence of God but also His closeness. He hears us. He acts. He is with us. We don’t need to train for years to tap into His essence.

There are many differences between God, as the Bible describes Him, and the Force of Star Wars but there’s a line from Han Solo in the new movie that sums it up. One of the new characters talks about how he’s going to do something that seems impossible and Han asks him how. The young man says, “I’ll use the Force,” and runs off. Han yells after him, “That’s not how the Force works, kid!” That’s not how a personal, caring God works either.

Spend a little time today searching the Bible for God’s personal qualities. A good place to start is Psalm 23 and John 1. Both passages might be very familiar but look at them like you’re seeing an old friend. What does He look like? What gives you joy?

Jeff Chaves is the chief creative officer of Grace Pictures Inc., which he co-owns with his wife, Peggy. He got his start in video production as an Army Broadcaster in the 1980s. Full-time he serves as the pastor of the Las Vegas Rescue Mission.