“Because of your faith Christ has brought us into this place of undeserved privilege where we now stand, and we confidently and joyfully look forward to sharing God’s glory.” - Romans 5:2 (NLT)

“Jesus was born in Bethlehem in Judea, during the reign of King Herod. About that time some wise men from eastern lands arrived in Jerusalem, asking, ‘Where is the newborn king of the Jews? We saw his star as it rose, and we have come to worship him.’… After this interview the wise men went their way. And the star they had seen in the east guided them to Bethlehem. It went ahead of them and stopped over the place where the child was. When they saw the star, they were filled with joy! They entered the house and saw the child with his mother, Mary, and they bowed down and worshiped him. Then they opened their treasure chests and gave him gifts of gold, frankincense, and myrrh.” - Matthew 2:1-2, 9-11 (NLT)

MYRRH – a coveted perfume from the Far East

“For God so loved the world that he gave his one and only Son, that whoever believes in him shall not perish but have eternal life.” - John 3:16 (NIV) 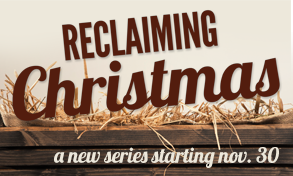