Geri-Antics - The Beauty of Our Elderly

GERI-ANTICS - THE BEAUTY OF OUR ELDERLY

I spend a lot of time with elderly people. Even if my visits weren't part of my work, I would still find a way to be with them. Everyday the elderly astound and inspire me with their stories of hardships overcome, of the ripple effects of wars fought abroad and in the homes down the street, of great loves lost or found, of building families and communities with hard work greased with the intrepid hope for something better. Their stories are better than any Facebook status or Tweet I've ever read. 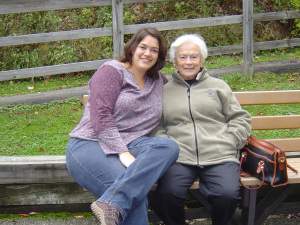 I wish I could take you along with me and introduce you to some of my friends. I wish you could listen to their stories with me, to laugh with me at their playful antics, to be wrapped in the musk of an eighty-year-old afghan, to feel the history in their paper-thin skin as they brush a kiss on your cheek or hold your hand like you're a beloved childhood friend. I want so much for you to understand how much you would gain if you knew, really knew, someone who is 107 or 99, or 84.

Last week I met a woman who grew up in New York. Her voice still carries the slanting tones of Brooklyn. She told me how she met her husband on the "boardwalk" of Staten Island at age fifteen and married him eight years later in a double ceremony with her twin sister and her beau. She reminisced for an hour about the house they saved for and finally bought on the Island and how she and her girlfriends in the neighborhood would gab every night on her front porch. The love she had for her life beamed from her eyes. Her glow dimmed a bit as pointed her crooked, arthritic finger along her backyard and talked about the cement-block walls that separate homes and people from being neighborly in this retirement state she calls "No Man's Land". She shared about the death of her friends, one by one, until she outlived them all. She held my hand, patted my knee and called me honey, saying, "It's so nice to have someone to talk to, someone who will laugh with me and keep my secrets. My friends -- I wish you knew them -- they were beautiful women, just beautiful."

Not too long ago I met a beautiful woman whose married name is Lovette. She told me all about being the first woman in her family to go to college. She surpassed that by earning a Master's degree and spent her career working for the homeless in her city. Mrs. Lovette's Eddy is long since dead, but she speaks of him with such affection he may as well be sitting on the couch with us. I'll never forget when she looked at me with half-winked eyes and told me, "That man! He came by his name honestly. Girl, did he love me!" Who says passion fades with age? Mrs. Lovette knows otherwise.

It's rare that a week goes by without an offer of adoption or a marriage proposal. One afternoon I visited a man whose wife was away on an errand. As I sang to him "My Bonny Lies Over the Ocean" and "You Are My Sunshine", he gripped my hand and winked. He flirted with me shamelessly for a half hour -- dementia making him forget that he was already married and old enough to be my grandfather. A colleague later told me that after I left the room he said, "I want to marry that girl. What a girl! Make her come back so I can propose." My computer was directly across from his room, in sight of the recliner where he sat. He winked and waved for hours, calling out, "Hey sweetie!"  I couldn't help but wave back. (I may have given in and winked too, but don't tell my boyfriend.)

The effects of dementia are difficult for family members to witness. Imagine your mother looking hale and hearty as she wears a diaper and no longer remembers your name or your father always wearing a blank expression, no longer capable of speech, of dressing or feeding himself. As a stranger, I have no memories to compare to the present reality to cause me grief. I meet people only as they are and approach each of them as beloved creations of God worthy of my respect, time and care. Sometimes these visits are easy and delightful and other times they are difficult puzzles.

I met Manny in a memory care unit of an assisted living facility. He was snoring (with drool) in a chair ten feet from a blaring TV. A touch to his hand woke him up. I tried to engage him in simple conversation to assess his comprehension level. After just a few moments it was clear that Manny has few verbal capabilities left. His words were garbled nonsense. He seemed pleased with the attention though, so I continued to speak with him, make eye contact, and to sing to him. He smiled and laughed. After about twenty minutes Manny was getting drowsy so I said goodbye and thanked him for sharing his smile with me. Then, clear as could be, he said, "Why the heck not?" As though it was no brainer to spend time with a thirty-something woman willing to hold his hand.

There are so many priceless stories I could share with you. Like the afternoon I led a quartet of elderly women in a rousing and ear-piercingly off-key rendition of Happy Birthday as they batted a balloon wheelchair to wheelchair. Or the time Dorothy, who is rarely able to finish a sentence before she loses her thought, looked at me and said, "I love you. I'd like to adopt you as my son or daughter." Or the beautiful moments when I've discovered the song that unfurls the poignant memories within someone who hasn't spoken in months and they begin to sing along.

Such beautiful people are all around us. They are in the senior centers we drive past every day on our way to work, in our neighbor’s in-law suite, in the pews of our churches, volunteering in our polling places and libraries and schools. The elderly are all around us. They have so much love and perspective and history to share with us. They need our time and care. They deserve our respect. But so many of us do not see them. When we pass them in the grocery story we see their wrinkles, their shuffling gait, their canes and walkers, their mismatched clothes and their comb-overs and tight perms. We look but do not see the WWII Veteran, the hardworking farmer who stocked his community's shelves, the pilot of the first commercial jumbo jet, the social worker who found respite for the homeless in her city. Unfortunately, our response to the growing mass of elderly in America is to put them in facilities with other elderly and think our responsibility fulfilled. Put them in a place and forget them seems to be our unspoken motto. So much is our loss.

My own grandparents, both eighty-six, are a delight to me and a regular reminder of my purpose and place in the world. More than once I've been talking to them on the phone only to have them interrupt and say, "Well, that's great honey, but we've got to go. We've got to go visit our elderly. Love you. Bye!" Touché, grandma and grandpa. Thank you for teaching me about who is important.

Saturday October 12 is an opportunity to minister to some of the elderly in Chandler. One of our many Be The Church projects is to go to a local retirement center and spend time with the residents. If you are interested in adding your name to the list, call the church office or sign up next Sunday in the lobby.

Barrenness and the Birth of Hope

A Response to a Typhoon